Health Emergencies on Board

Since the appearance of commercial aviation the functions of Cabin Crew have been increased with many more functions and responsibilities, perhaps today the most visible function of a flight attendant may seem the attention of the passengers, such as accommodate people in their seats, help them with luggage or any other need when they have taken a seat, including the food and beverage service. However, the most important task of Cabin Crew is to be aware of the safety and security of all passengers. Medical emergencies also occur on aircraft and the resources we have are limited. In case of emergency, the cabin crew are the ones who must provide support and assistance to passengers, whether it is a minor nervous breakdown due to the fear of flying or due to turbulence or if it is a question of administering first aid and assess the passenger's condition to take appropriate action.
To this end and required by law, specific kits must be carried on board. 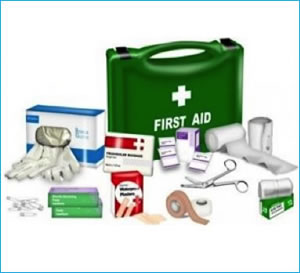 The first aid kit and emergency medical kit contain elements necessary to heal wounds, to attend an illness or attend medical emergencies. The contents of the FAK (First Aid Kit) and EMK (Emergency Medical Kit) are regulated by law, and can be found in Annex 6, part 1 of the ICAO Chicago Convention. Following these rules, the airplane must have these two types of kits, which differ in content, depending on the intended use.

First Aid Kit (FAK) contains the necessary elements to treat small discomforts and accidents that may occur along a flight. The FAK is mandatory on any airliner, and can be used by both crew members and by some passengers. It is mandatory to carry at least one First Aid Kit.

Before using any medication, it is important that the affected person fill out and sign a "drug request form" (in some companies). We should also ask if there is any allergy to anything, if there is alcohol consumption in the last 24 hours or if you have taken the same medication before to avoid reactions and problems.

The EMK is a mandatory Medical Emergencies kit on all airplanes with more than 30 seats and may only be used by medical staff or qualified staff and under the authority of the Commander, however not all companies have implemented the defibrillator.

FIRST AID IN A PLANE: The importance of the performance of the Cabin Crew First-aid training is a very important aspect in the training of a flight attendant. In fact, among the duties of a Cabin Crew is to offer immediate and temporary attention to a passenger after suffering an accident or sudden illness to avoid a major injury or complication, relieve pain or counteract shock. Moreover, the rapid and effective assistance of a Cabin Crew can mean the difference between life and death, or between temporary and permanent disability.

For these reasons, the periodic training of cabin crews is vital.

In Spain, for example, after almost 10 years Cabin Crew got the professional qualification (Real Decreto 1553/2011), during the process and in communication with the INCUAL, NATIONAL CATALOG OF PROFESSIONAL QUALIFICATIONS, EurECCA requested that the contents for first aid were more complete and with greater number of teaching hours, our suggestion was not considered.

Despite having obtained the vocational training for Cabin Crew, the authorities still do not implement the compulsory training for new hires, program describing the training necessary to acquire competencies in first aid among others. The non-implementation allows airlines to establish training minima in just over a month, which is clearly unfair to all private training centers for Cabin Crew where they require the full implementation of the program.

As Cabin Crew we request a better training to provide this first aid, a standardized training for all European companies, nevertheless the companies are not interested to get more qualified staff because this would imply higher wages not compatible with low cost age.

Administration of first aid in an airplane
When an in-flight medical emergency occurs, immediate access to care is limited even with the medical equipment, Cabin crew are trained to provide first aid and limited medical assistance but are not qualified to deal with all potential situations. It is, therefore, critical that airlines have protocols in place for actions to be taken in the event of an on-board medical emergency. First-aid administration on an aircraft should be performed following six basic rules in all situations. These basic rules are as follows:

In any case, it is necessary to act quickly and deal with the urgent conditions first. The order of urgency to attend several injured passengers is as follow:

It is important to act in an orderly manner and to attend to emergencies following a series of guidelines, which are:

In the situation for injury or health situation the flight crew response to an on board medical emergency will depend on the nature of the problem, the degree of urgency for medical intervention and the location and phase of flight in which the situation occurs. Unless the situation is considered immediately life threatening, it is normal that no decisions will be taken until more information is available through an assessment and diagnosis process. However, the flight crew should use time between first notification and the end of the assessment/diagnosis process to consider their options and the implications of any decision. Consultation with Company operations may be prudent at this stage.

This would be the most desired scenario for all, however not all crew members in Europe have the necessary qualification even for this first response.

As EurECCA, we request a better training to provide this first aid, a standardized training for all European companies. Poisoning is caused by swallowing, injecting, breathing in, or otherwise being exposed to a harmful substance. Most poisonings occur by accident. Food poisoning occurs when you swallow food or water that contains bacteria, parasites, viruses, or the toxins made by these germs. Most cases are caused by common bacteria such as Staphylococcus or E. coli.

Immediate first aid is very important in a poisoning emergency. The first aid we give before getting medical help can save a person's life.

Symptoms of poisoning may take time to develop. However, if we think someone has been poisoned, we do not wait for symptoms to develop before getting that person medical help.

In cases of poisoning the usual causes are Carbon monoxide gas (from furnaces, gas engines, fires, space heaters) including the fume events.

In cases of food poisoning we will find the following scenarios: Protocol on board: 2 Pilots are served different meals and cannot share them, this is done in case of food poisoning.

Symptoms from the most common types of food poisoning will often start within 2 to 6 hours of eating the food. That time may be longer or shorter, depending on the cause of the food poisoning:

Dehydration is the most common complication. This can occur from any causes of food poisoning. Infants and older people are at the greatest risk for food poisoning

Art. 14 Chicago Convention: Public Health Authorities called upon to act  “Each State agrees to take effective measures to prevent the spread of communicable diseases, and will keep in close consultation with the agencies concerned with international regulation”.

Since the outbreak of the bird flu, whose first outbreak occurred in Hong Kong in May 1997, far from our area of influence, but it was not until 2003 that there was an outbreak of the epidemic in the Netherlands that we became aware of the capacity of expansion of the virus through the transport and more in particular of the air transport that gets an epidemic outbreak to become a pandemic.

CAPSCA was set up during the SARS crisis in 2003, the framework of its objectives extends beyond what is related to communicable diseases to incorporate all types of issues that have the potential to become a public health emergency involving the aviation sector.

Public authorities act through CAPSCA, a joint body of ICAO and WHO (World Health Organization) (“Collaborative Arrangement for the Prevention and Management of Public Health Events in Civil Aviation”) – 106 States Parties – Meets annually and issues Guidelines and Conclusions to States, e.g. on exit health controls, travel restrictions to and from affected areas and related issues.

CAPSCA guidelines are addressed primarily to States, but also concern air carriers regarding restrictions on flights:

We all know that common flu is one of the deadliest common diseases on our planet, every year according to the US Centers for Disease Control about 40,000 deaths a year, but the flu is not the only contagious disease that we have been exposed in recent years: SARS, Influenza, Zika, Dengue, Chikungunya fever, Cholera, Ebola.

We are not here to talk about these diseases but the propagation of them through air transport, the performance and exposure of the crew and passengers to all of them.

Infectious diseases transmitted through the air during travel on passenger aircraft are a matter of concern to public health officials. In 2002, a single patient with SARS infected 20 people on an international flight, which showed how airplane flights can serve as a route for the rapid spread of emerging infectious diseases and as a conduit for forging pandemics.

Researchers know that bacteria and viruses can be transmitted in three ways on airplanes: inhaling tiny droplets produced by coughs or sneezes from infected people and transported long distances into cabin air; inhaling larger droplets that tend to fall less than one meter from their source; and the transfer of small drops from object surfaces to the eyes or nose of susceptible individuals. The latter route, perhaps responsible for up to 80 percent of disease transmissions, can act when passengers touch contaminated surfaces.

Air transport could disseminate infectious diseases, in a few hours around the world. Although it is considered one of the safest means of transportation, little is known about its public health safety impact, keeping in mind that it is expanding and increasing the number of users who can acquire and spread these diseases.

The critical point to avoid a pandemic outbreak is to foresee to be prepared; this could be done with health and aviation staff training.

The airlines told us they comply with the protocols published by the IATA compiled by WHO in 2005, however, these protocols are far from being the most suitable in a flight cabin, the crew do not have any training for these situations.

A communicable disease is suspected when a traveller has  fever (38º C/100ºF) associated with one or more of the following signs or symptoms:

What can we do on board?

A general term referring to any action of hand cleansing, performed by means of applying an antiseptic hand rub. Touching the face with hands should be avoided. Hands should be washed frequently.

This would be the primary care among other specifications contained in the WHO list.

The means of protection used by health staff in these situation leaves us perplexed by the lack of them for the crew. If this lack of training adds to the pressure of airlines not to suspend their flights to areas declared by WHO with outbreaks, in what situation are the crew and the Passenger actually?

As EurECCA, we request specific protocols for contagious diseases on board.

EurECCA represents, protects and develops the rights and needs of cabin crew all over Europe